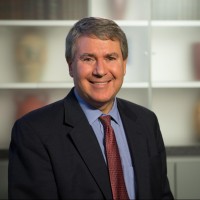 Jeffrey A. Golden is the Ramzi S. Cotran Professor of Pathology at Harvard Medical School and the Chair of Pathology at the Brigham and Women’s Hospital. He received his BA from the University of California, San Diego and his MD from the University of Pennsylvania. He trained in anatomic pathology and neuropathology at the Massachusetts General Hospital followed by postdoctoral training in the Department of Genetics at Harvard Medical School at which time he was an Instructor in the Department of Pathology at Brigham and Women’s Hospital. He returned to the University of Pennsylvania School of Medicine and the Children’s Hospital of Philadelphia as an Assistant Professor of Pathology and Laboratory Medicine in 1996 rising to the rank of Professor in 2008. In 2003 he established the division of Developmental Biology for Pediatric Disorders at the Children’s Hospital of Philadelphia and in 2008 was appointed Pathologist-in-Chief at the Children’s Hospital of Philadelphia. In 2012 he moved back to Boston to assume the Chair of the Department of Pathology at the Brigham and Women’s Hospital. In addition to his local roles he is a past president of the American Association of Neuropathologists, an Associate Editor for the Journal of Neuropathology and Experimental Neurology. He has served on many international, national and local committees, has organized numerous national and international meetings. His work has been recognized with a number of awards including the Litchfield Lectureship at Oxford College, the Dorothy Russell Memorial Lectureship from the British Neuropathology Society, and three times by the Weil Award from the American Association of Neuropathologists. His current efforts are focused on leading the development and implementation of Computational Pathology and Precision Medicine at the Brigham and Women’s Hospital.

Harnessing the Power of Digital Pathology